When Do You Need to Replace Bomb Blast Window Film?

Investing in bomb blast window film is great way to secure your Denver property. Whether you’ve come to this decision in the hopes of protecting your school, college campus, bank, pharmacy, data center, or commercial building, it’s a smart move to make.

But now that you’re getting ready to finalize your contract and initiate the installation, you probably have some questions. This is natural; after all, we often don’t think of all the important questions until later on down the road. One of the questions that you may have is, when will my window film need to be replaced?

That’s a great question! And one that you deserve to know the answer to before signing off on such an important purchase. In this article, we’ll discuss the average life expectancy of security window films.

As a general rule of thumb, most standard window films last about 10 to 20 years. But bomb blast mitigation window film is an exception. Since it’s a high grade security window film, it can last the entire lifetime of the window. That is, of course, unless the film has to be used for some reason. Which we hope that it never does!

The tint may degrade after a few years. But the film itself will not come loose or lose its resiliency.

How to Take Good Care of your Window Film

Taking good care of your window film is important for ensuring its longevity. Follow these steps for easy window film maintenance:

Learn more about bomb blast window film for your Denver property by calling our team today! 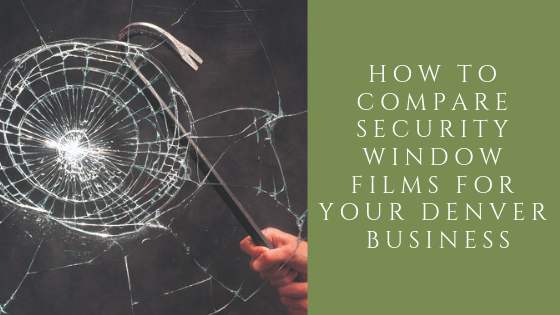 February 18, 2019 How to Compare Security Window Films for Your Denver Business Read More